skip to main | skip to sidebar

In the drive to keep working and keeping clients' blogs updated mine is so woefully behind I'm ashamed.

Oh it's been 10 months, too long, since I blogged. I get busy blogging for others, then run out of steam for my own work, or run out of ideas! As it has been ten months, let's do a "I did this" blog, then Thanksgiving...>

I worked. I had some business but nothing like I have had for the past 15 years. The economy has not picked up for very small businesses for sure. I've had a few new clients but most say "We have no money for a web site, or for updates." Fortunately I had and at this time still have, my part time job with Leapforce. Working online from home, that's a blessing for which I am Very Thankful.

Renato worked. Yep, the husband now has a job, since August, driver and companion to a gentleman who lives on the northwest side of Ft Worth. Most weeks it's five days, occasionally four days. Great perks such as great seats at the NASCAR race up at Texas Motor Speedway in early November which included a private helicopter to and from the track. So even with the downturn in my business I'm not running in circles screaming and crying trying to figure out what to do Without to pay the bills and the house payment. I am Very thankful for that blessing.

The cats played. I know where a good portion of the money goes: cat food. Sadly we lost Crush in June (another reason Renato will Never have a birthday in June again). Crush was playing hard, then laid down and died. Vet did an autopsy (another word for it er..necrosomething can't spell it though) and found that Crush died of an aneurysm in his brain. I always said that cat had headaches, guess I was right.

The new kitten arrived. Well sort of...last week Renato blew into the house and said, "Come look at this kitten its front legs are broken." Ack! Dashed out and there was a wee thing sitting in the bird seed. It dashed to the storage shed, moving pretty fast for broken legs! They aren't broken, this boy is a "squitten" or "twisty cat" with the congential deformity known as Radial Hypoplasia (RH). 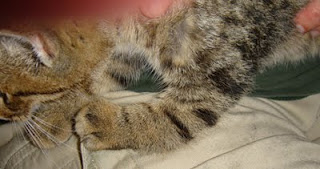 This picture only shows one front leg but the other matches it. He walks on the entire front er forearm. You have to be careful if you're holding him then sit him down as he falls on his face, though he pops right back up. He is just the sweetest, most loving kitten!

And has now been vetted. We though he, as he was so small he was about 2 months old, but no, he's 4 months, but only weighs 3.5 pounds. Further, his breast bone is slightly deformed, it's pointed and sticks out further than it should, and finally the bottom most joint on his tail is enlarged and disjointed. 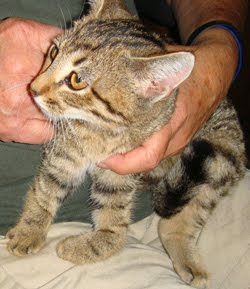 When he plays too hard he pants and makes a clicking sound, same clicking sound when he purrs loudly. At first I thought "What's wrong with the furnace? Sounds like its trying to click on?! Or the hot water heater?" Both are just down the hall. After a day of getting up and checking here there and yon I realized it was coming from this baby! Oh his temp name is Capt. Jack Sparrow. Of course. Gotta be a pirate in this house! Though I think "Danny Ocean" would be pretty good as well.

And finally: I'm grateful for so many things including family and friends - old friends and new friends alike. And one of our oldest friends Jeff Carroll is spending the holiday in hospital in Bryan, TX. He has had a heart attack and now is being scanned, rescanned, tested, treated, poked and probed. Many hugs to you Uncle Jeff, I love you dearly and hope you are home soon.
Posted by Atomic Web Kat at 11:39 AM 1 comment:

If you need a Disneyland fix...

as I usually do, here's the Live webcam from Howard Johnson.
Hojoanaheim Mattercam 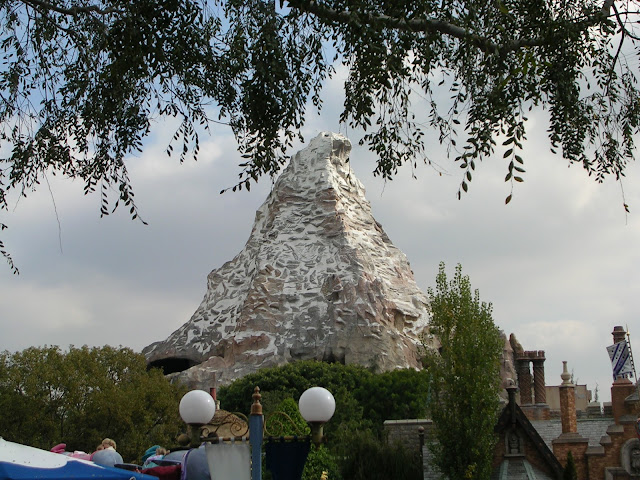 The co-founder and CEO of the $1 billion company offers advice on how to shape and articulate your vision for your own brand...link to BusinessWeek page here
Posted by Atomic Web Kat at 10:53 AM No comments:

Can you help with wee Marty's surgery? Even a dollar goes to help pay vet bills.

Sweet little Marty had been neglected by a previous family. Was left with a severe infestation of worms that caused his anus to prolapse. He was rescued by a loving young couple attending college and was given vet care. Marty was cleaned up and his anus was stitched. It looked like all was going well, but a few days after the stitches were out poor Marty prolapsed again.
Little Marty was in the ER Thursday night (October 29) with severe anal swelling. After two trips they finally did get the swelling down so he could move his bowels. If you can, please give a $1 or two to help raise funds for the permanent surgery that can fix little Marty and give him the life he deserves.

There is a "chip in" link on his page. I clicked it and used paypal for a donation.

The rescurer's blog, about Marty. 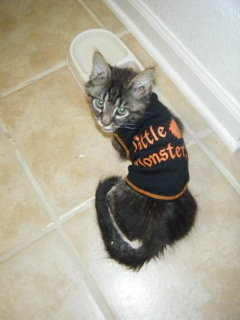 The next time you think "This doesn't happen"

Watch the "Operation Save Gunny" video and know the horrors of dog fighting and the story of one "bait" dog who survived.
Posted by Atomic Web Kat at 9:57 AM No comments:

as of Oct 23! A list of the cities where it will be playing is on the official site:
Walt and El Grupo
Posted by Atomic Web Kat at 10:18 AM No comments: